KPFT is in Pledge Drive and this is your first chance to support The Monitor. The show has a goal of $880 for the hour. Please call 713.526.5738 during the show to pledge your support. You can also donate securely online at https://pledge.kpft.org/ Just select The Monitor from the list of shows and enter your details. Thank you!

More about this week’s Guest:

Greg Palast has been called the “most important investigative reporter of our time – up there with Woodward and Bernstein” (The Guardian).  Palast has broken front-page stories for BBC Television Newsnight, The Guardian, Nation Magazine and now Rolling Stone Magazine.

Greg Palast has just released his new movie: The Best Democracy Money Can Buy: A Tale of Billionaires & Ballot Bandits and the sequel of his New York Times bestselling book with the same title.

He is the author of the New York Times bestsellers Billionaires & Ballot Bandits, Armed Madhouse , The Best Democracy Money Can Buy and the highly acclaimed Vultures’ Picnic, named Book of the Year 2012 on BBC Newsnight Review.

His books have been translated into two dozen languages.

Palast is known for complex undercover investigations, spanning five continents, from the Arctic to the Amazon, from Caracas to California, using the skills he learned over two decades as a top investigator of corporate fraud.

Join me in welcoming Greg Palast in Houston next month. Book your ticket now! Note: You will not be charged if the screening does not go ahead but let’s get enough people signed up to make sure it happens. The event will raise money for KPFT and let you be part of making sure this great new film is seen as widely as possible before election day.
http://gathr.us/screening/18017

James A. Otto, a former Marine Corps officer in the 1970s, is an attorney based in Northridge, CA. He served as an Officer in the United States Marine Corp. from 1976 to 1980. From 1996 to 2002, he worked for the California Department of Fair Employment and Housing prosecuting violators of California’s civil rights laws in both employment and housing. Presently, he is developing new legal theories to protect American workers and green card holders from national origin discrimination.

The following is extracted from a press release by Otto:

“Civil Rights Attorney James Otto says that “an unholy alliance of lawyers and craven corporation practices have installed surreptitious strategies to illegally discriminate against the American workforce. The result is the betrayal of the American dream of “fairness to all”. Otto states that “Disney Corporation authorized a NO U.S. WORKER EMPLOYMENT POLICY firing over 700 competent U.S. workers in Florida, Anaheim and Burbank, California, as well as, New York. Disney required them to train their foreign imported replacements in order to be paid. Disney executives told employees “Get used to it. You need to learn to wear a sari [Indian dress] because that is the only place you will ever get a job.”

To see why the “disconnect” is real – view this  YouTube video (http://programmersguild.blogspot.com/2007/06/youtube-gate-cohen-grigsby-train-how-to.html)

The result is an inequality that is rapidly undermining democracy. Like an odorless gas, every corner of our country is being sapped of its strength. The evidence of the economic pollution is everywhere. As Bob Dole once said” The poor don’t contribute to campaign funds.” Our government is consistently favoring the rich. This is the sad source of the problem.

WHERE DO SOME OF OUR POTENTIAL PRESIDENTS STAND?

Hillary Clinton supports importing more foreign workers to replace and fire competent U.S. workers. As Secretary of State, she authorized the U.S. Embassy in India to break federal law by accepting and processing EVERY VISA IN EXCESS OF 60,000 TO REPLACE American workers. Clinton spent over 40 million tax-payer’s dollars to build and educate foreigners to be imported and replace American workers

Kani Xulam is director of the American Kurdish Information Network and a native of Kurdistan.He studied International Relations at the University of Toronto, holds a BA in history from the University of California Santa Barbara and an MA in the International Service program at American University. At the University of Toronto, he represented Kurdistan at the Model United Nations, which passed a nonbinding resolution recognizing the right of the Kurdish people to self-determination.At the University of California Santa Barbara, he was part of a group of peace activists who protested the first Gulf War by taking part in a sit-in at Chancellor’s office in January 1991. Everyone was arrested. Mr. Xulam pled not guilty, defended himself, and was sentenced to 18 hours of community service to plant saplings in Santa Barbara. In 1993, at the urging of Kurdish community leaders in America, he left his family business in Santa Barbara, California to establish the American Kurdish Information Network (AKIN) in the nation’s capital. AKIN is a nonprofit organization dedicated to fostering Kurdish-American understanding and friendship.

In 1997, he took part in a hunger strike on the steps of the Capitol urging members of Congress to use their good offices on behalf of their imprisoned Kurdish colleagues. 153 members signed a letter urging President Clinton to intervene on the matter. Mr. Xulam, on the advice of his physician, ended his fast on the 32nd day.

Quote: “The U.S. use of bases in Turkey follows Ankara breaking a three-year truce with the Kurds — and the U.S. government is not stopping that. This is in line with prior U.S. government policy. Three years ago, the U.S. provided Turkey with ‘actionable intelligence,’ which resulted in the death of 34 Kurdish villagers. While Kurdish forces have been quite effective in fighting ISIS in Syria, the Turkish government has turned its back to ISIS fighters crossing its borders. This is partly driven by an incredible animosity toward [Syrian President] As’ad — partly out of an anti-Alawite sectarianism. With elections coming up and with Erdogan restarting a low-intensity conflict in Turkey, the ongoing war in Syria and Iraq could easily spread to Turkey.”

For more background see Patrick Cockburn: “Turkey conflict with Kurds: Was approving air strikes against the PKK America’s worst error in the Middle East since the Iraq War?“

Ellen Barfield grew up in Texas. Like so many, she joined the Army to get the money to
finish college. While in the army she was stationed in Germany and Korea. She served in the U.S. Army from 1977-1981. She has been a full-time peace and justice activist for nearly thirty years. In addition to being on the board of the War Resisters League, Ellen is the coordinator of the Veterans for Peace Baltimore Phil Berrigan Memorial Chapter, and works on national committees of VFP, Women’s International League for Peace and Freedom (WILPF) and School of the Americas Watch.

Since 2010 Hancock has been the home of the 174th Attack Wing of the NY National Guard – an MQ9 Reaper drone hub piloting weaponized drones 24/7 over Afghanistan and likely elsewhere. Also since 2010 Hancock has been the scene of twice-monthly anti-drone demonstrations outside its main gate as well as occasional larger demonstrations and scrupulously nonviolent civil resistance organized by Upstate Drone Action, a grassroots coalition. These have led to over 160 arrests, and numerous trials in DeWitt as well as $375 fines, Orders of Protection, and numerous incarcerations. Read more about anti-drone actions www.upstatedroneaction.org 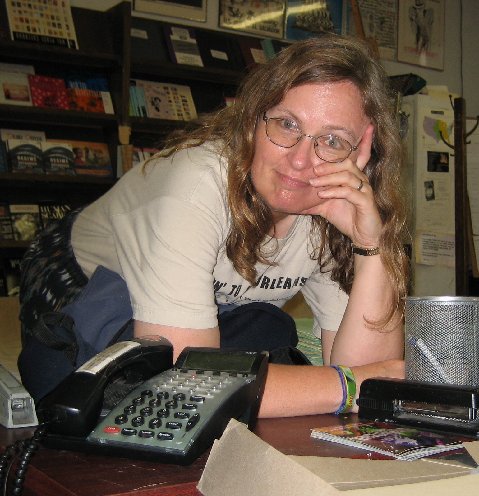 Ellen Barfield was  among 31 arrested in the driveway to Hancock’s main gate on East Molloy Rd on April 28, 2013 for “dieing-in” with bloody shrouds or for attempting to read aloud to the military personnel behind Hancock’s barbed wire fence a list of children killed by U.S. drones. The activists said they sought to “prick the conscience” of base personnel and the chain of command responsible for the war crime originating there.

On June 27th, after deliberating a couple hours, a six-person jury found four of those arrested, including Ellen, not guilty of obstructing government administration (OGA) at Hancock Air Base near Syracuse, New York, but guilty of trespass, a violation carrying a maximum 15-day imprisonment.

Yasmin Nair is a co-founder and member of the editorial collective  Against Equality; she contributed essays on gay marriage, hate crime legislation, and Don’t Ask, Don’t Tell to their book, Against Equality: Queer Revolution, Not Mere Inclusion. She is also a member of the Chicago grassroots organisation Gender JUST (Justice United for Societal Transformation) and serves as its Policy Director (a volunteer position).  Nair was, from 1999-2003, a member of the now-defunct Queer to the Left.  Her activist work includes gentrification, immigration, public education, and youth at risk. Her recent article is called “The Secret History of Gay Marriage“

Yasmin Nair‘s writing and organizing focuses on neoliberalism and inequality, queer politics and theory, the politics of rescue and affect, sex trafficking, the art world, and the immigration crisis.  You can read her work in various anthologies and journals, including Captive Genders: Trans Embodiment and the Prison Industrial Complex, Singlism: What It Is, Why It Matters and How to Stop It, Windy City Queer: Dispatches from the Third Coast, Arab Studies Quarterly and Gay Press, Gay Power: The Growth of LGBT Community Newspapers in America.