Gareth Porter is an independent investigative journalist and winner of the 2012 Gellhorn Prize for journalism. He is the author of the newly published Manufactured Crisis: The Untold Story of the Iran Nuclear Scare. He has published investigative articles on Salon.com, the Nation, the American Prospect, Truthout and The Raw Story. His blogs have been published on Huffington Post, Firedoglake, Counterpunch and many other websites. Porter was Saigon bureau chief of Dispatch News Service International in 1971 and later reported on trips to Southeast Asia for The Guardian, Asian Wall Street Journal and Pacific News Service. He is the author of four books on the Vietnam War and the political system of Vietnam. Historian Andrew Bacevich called his latest book, Perils of Dominance: Imbalance of Power and the Road to War , published by University of California Press in 2005, without a doubt, the most important contribution to the history of U.S. national security policy to appear in the past decade. He has taught Southeast Asian politics and international studies at American University, City College of New York and the Johns Hopkins School of Advanced International Studies. 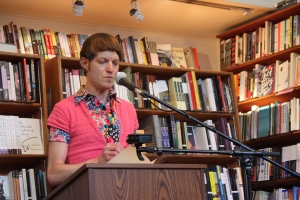 described as “startlingly bold and provocative” by Howard Zinn, “a cross between Tinkerbell and a honky Malcolm X with a queer agenda” by the Austin Chronicle, and “a gender-fucking tower of pure pulsing purple fabulous” by The Stranger, Mattilda is most recently the author of a memoir, The End of San Francisco, winner of a 2014 Lambda Literary Award. She’s also the editor of Why Are Faggots So Afraid of Faggots?: Flaming Challenges to Masculinity, Objectification, and the Desire to Conform (AK Press 2012), an American Library Association Stonewall Honor Book and a finalist for a Lambda Literary Award. Mattilda is the author of two novels, So Many Ways to Sleep Badly (City Lights 2008) and Pulling Taffy (Suspect Thoughts 2003). She is the editor of four additional nonfiction anthologies, Nobody Passes: Rejecting the Rules of Gender and Conformity (Seal 2007), That’s Revolting! Queer Strategies for Resisting Assimilation (Soft Skull 2004; 2008), Dangerous Families: Queer Writing on Surviving (Haworth 2004), and Tricks and Treats: Sex Workers Write about Their Clients (Haworth 2000), which now also appears in Italian (Effepi Libri 2007). Mattilda is currently finishing a third novel, Sketchtasy.

Read: “Transgender Troops” Should Be an Oxymoron

Our first guest will be Ellie Smeal, who has played a leading role in both national and state campaigns to win women’s rights legislation for over two decades. Smeal is president of the Feminist Majority Foundation, which publishes Ms. Magazine. As Ms. celebrates its 35th anniversary, Monitor co-host Pokey Anderson will discuss with feminism with her — the past, and looking to the future.

“I’ll give it six months before they run out of things to say.”

Ms. was the first U.S. magazine to feature prominent American women demanding the repeal of laws that criminalized abortion, the first to explain and advocate for the ERA, to rate presidential candidates on women’s issues, to put domestic violence and sexual harassment on the cover of a women’s magazine, to feature feminist protest of pornography, to commission and feature a national study on date rape, and to blow the whistle on the undue influence of advertising on magazine journalism. Ms. was the first national magazine to make feminist voices audible, feminist journalism tenable, and a feminist worldview available to the public.

Ellie Smeal has fought for passage of landmark legislation such as the Pregnancy Discrimination Act, Equal Credit Act, Civil Rights Restoration Act, Violence Against Women Act, Freedom of Access to Clinic Entrances Act, and Civil Rights Act of 1991. She has pushed to make Social Security and pensions more equitable for women, and to realign federal priorities by developing a feminist budget. She has campaigned to close the wage gap and to achieve pay equity for the vast majority of women who are segregated in low-paying jobs.

When she was president of the National Organization for Women, she fought for the ERA. She led the first national abortion rights march in 1986, drawing more than 100,000 participants to Washington, D.C.

Today’s second guest will be Robert Jensen, an associate professor at University of Texas in Austin. Monitor co-host Mark Bebawi will discuss with him his new book, “Getting Off: Pornography and the End of Masculinity.”

Prof. Robert Jensen teaches graduate and undergraduate courses in media law, ethics, and politics. Prior to his academic career, he worked as a professional journalist for a decade.

Prof. Jensen has done work on the topic of pornography and the radical feminist critique of sexuality for over a decade. He has addressed questions of race through a critique of white privilege and institutionalized racism. In speaking and writing he has challenged American assumptions of patriotism and empire, and he is involved in a number of activist groups working against U.S. military and economic domination of the rest of the world.

His undiluted views have stirred controversy; in 2004 he was named on a “professor watch list” published by Young Conservatives of Texas.

A native of Fargo, North Dakota, he obtained his Ph.D. in media ethics and law in the School of Journalism and Mass Communication at the University of Minnesota. He lives in Austin.

RECENT BOOKS:
“Getting Off: Pornography and the End of Masculinity”
“The Heart of Whiteness: Confronting Race, Racism and White Privilege”
“Citizens of the Empire: The Struggle to Claim Our Humanity”

This entry was posted in Feminism, Masculinity, Radio Shows.